Speak Your Truth if You Dare.


Freedom of speech is the freedom for a person to say what they believe, not what is socially acceptable, not what others want to hear, not even what is nice or correct. It is the freedom to make an ass of yourself, to annoy others and to perhaps make a point that rises above the static and mind pabulum of the world in general.

If we allow those who say what we do not want to hear to be persecuted, fired from their jobs, labelled as guilty of crimes without trial or due process, we invite the same to be done to ourselves. Let us not become the mob shouting down the voice of dissention, but rather the informed opinion stating our truth bravely and with even voice while accepting that the other may hold a different truth that for them is equally valid.

It has become so common now for a person to be fired or punished in some other way for saying something that annoyed a group they don’t like for whatever reason that I feel the freedom to speak in sorely endangered.

You want my opinion on some issues.
The washroom used by a transsexual:
One, if they are seriously living as their gender of choice, who the heck is going to know in the first place?
Second, if someone is walking around in an evening gown with a full beard it’s none of my business, but I can see why some folk could be upset sharing the ladies room with them. I think the comfort of the genetic women should be considered but again if the person isn’t flaunting their intersexed nature who’s going to know?
It comes down to, is the person serious about their gender identity or going for shock value. Sadly there are always a minority of those in anything on the borders of the mainstream who do it for shock value and they make it harder for folk who legitimately are dealing with issues.

Now the important bit. If a person wants to say they are against it, they have a right to without endangering their job so long as they do it on their own time and make no allusions to representing their employer. That is free speech. Now if their actions results in people not patronising that employer and the drop in sales can be traced to this person that that’s grounds for dismissal, but not simply because they voiced and unpopular opinion.

Donald Trump:
The man scares the biggeasers out of me. Most of what he says is drivel, thought even a broken clock is right occasionally. I wish he would shut up and blow away.

Still in all, the man has a right to speak and if people want to listen in a free society I shouldn’t be able to stop them. Rise counter arguments of course that is my right but silence him or threaten his livelihood in a bid to silence him, no.
The truth is robust enough to look after itself if people will simply speak it and let the other guy speak their perceived truth.

Another aspect of our society’s slip away from reason and due process is the case of the radio or TV host who was accused, and that is the important word here, of rape. Setting aside whether he did it or not, he was fired and his career ruined before he spent a day in court. We have a system of laws that determine guilt. That system may be flawed and need correcting but it is still in place. So why was he punished before trial? We also have prescribed punishments for crimes. Why was his employer allowed to levy an additional punishment arbitrarily? If someone can’t come to work because they are serving fifteen to life you fire them for not coming to work not because of the crime they committed that had nothing to do with there performance as an employee.

I don’t care is someone is right left or down the middle on their politics, this mob mentality has got to stop. We are moving to a place where no one will be able to speak their mind for fear of reprisals.

So hate me, hate what I say. Challenge me, if you have good points you may change my opinion, but don’t try to silence me or anyone else unless they are promoting direct violence against or spreading lies about a person or persons.
Posted by Stephen B. Pearl at 16:12 No comments:


A key element in the Norse sagas is when Odin sacrifices his eye for a drink from the well of knowledge and gains foresight in to all that is to come. From that moment onward his life becomes a quest to stop or delay the prophecy. Another recurring theme is that Odin’s actions often set up the very circumstances that bring the prophecies events into being. This is truly a tragic tail, but is it also a cautionary one?

Odin sacrifices his eye. Is this symbolic of his ability to see the other path? Take the case of Lady Hel, for example. He cast her into Niflheim where she became his foe. Had he not had foreknowledge of a possible future would he instead have been the loving uncle that could have turned her nature and created an ally? Hel was destined to rule Niflheim, but was she destined to be antagonistic to the Aesir? If Odin had stepped up and told the other gods to stop teasing her because of a birth defect, would her nature have been different?

The pattern repeats with Fenrir. They bound Fenrir to guard Asgard, but the truth is any dog can be made mean, and most dogs can be raised gentle. I’m sure it is the same with wolves. If Odin had arraigned play dates with Geri and Freki for Fenrir would he have had a noble ally as opposed to an enemy when the final day came?

The one instance where Odin did take one of Loki’s children under his wing was Sleipnir who proved a most loyal stead.

There are other instances. The question becomes, did Odin in sacrificing his eye close the avenues that would have lead to a different future? Did his quest for foreknowledge blind him to the best course in the present?

I’ve seen it as a professional psychic where I predicted an injury for a semi-pro athlete. I warned him, even told him it would be in his lower body and that he needed to do extra work to strengthen the area. I told him flat that predictions were probabilities and that an act of will could alter them. Later that year I received a phone call telling me his leg was messed up during a practice. Complete face palm on my part because the point to the warning was to prevent the injury.

Are Odin’s actions and their consequences a warning not to let prophecy close your vision of the present? Not to let fear of tomorrow cause one to act in a less than noble way today?  Having read the Runes for decades I can tell you it is all too easy to let them dictate your actions. In desperation we seek answers, but does striving for the future we have glimpsed through a foggy and indistinct haze close us to other opportunities?

In the stories is Odin a wise fool so focused on the broken bridge over the river he fails to see the stepping stones at the bridge’s base? (This is said with respect to the all father but the point must be considered.) 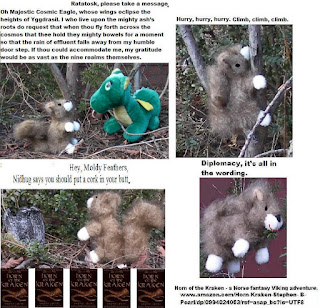 Horn of the Kraken, a Norse fantasy Viking adventure, based on the Fate of the Norns Ragnarok role playing system.